This is based on “secret filming” at a fringe event of the Labour Party Conference at which, it is alleged, Jackie made some controversial remarks including criticising Holocaust Memorial Day.

Norman Thomas, chair of Momentum Thanet was present at the meeting and says the account of Jackie’s remarks were distorted and unfair.

Mr Thomas said: “I was at that meeting and can testify she said nothing whatsoever anti-Semitic. She did not in any way “criticise” Holocaust Memorial Day or imply that it was not possible to define anti-semitism.

“She did wish that Holocaust Memorial Day might be open to more groups who have experienced terrible suffering in the past, prior to WWII, and she did say, quite rightly, that the presenter at the meeting had failed, despite repeated requests, to come up with a coherent definition of anti-Semitism

“Jackie is a long-time anti-racist campaigner, is of Jewish descent and has a Jewish partner. She is not and never has been anti-Semitic. I have stood alongside her demonstrating against fascist thugs and bullies in Margate and Dover. To accuse her of anti-Semitism is disgusting.

“On Channel Four news her remarks were taken out of context and the short fragment of film shown on TV was totally unrepresentative of the full discussion which took place.This is an outrageous attempt to smear Jackie and so damage Jeremy Corbyn by association and it is utterly unfair and unjust.”

Added Mr Thomas: “Momentum is taking its decision this Monday — so people wishing to support her should act urgently”

Anyone wishing to express support for Jackie Walker should email emma.rees@peoplesmomentum.com stating if they are a member of the Labour Party etc.

The organisers of Saturday’s Jeremy Corbyn rally in Ramsgate believe it will start a new movement for change in Thanet.

Jackie Walker of Momentum Thanet said: “This huge and amazing rally was the biggest political event on the isle in years. It shows the huge appetite among people here for a new beginning.”

Momentum is now in the process of setting up of working groups to tackle issues such as health, housing, jobs and education in Thanet and is inviting local people to get involved.

She said: “We urgently want people who have expertise and ideas to come forward. Another Thanet is possible – but it has to be a collective effort.”

The organisers were  amazed when a crowd – estimated by the BBC to be 3000 strong – packed the town’s East Cliff bandstand.

The large crowds meant Mr Corbyn had to speak from a fire engine to be seen.

“It was absolutely staggering,” Jackie said. “And at such short notice — we only knew Jeremy was coming a few days before.”

The rally, called “Another Thanet Is Possible”, was planned to take place on Ramsgate seafront. The coming of Mr Corbyn meant a last minute change of venue.

“It was all hands to the wheel – and it meant a big group effort by all our volunteers,” Jackie said.

She added:  “I must send our great thanks to the Events Team of Thanet District Council who were so helpful in making possible our move with such little warning.”

Rumours of a planned disruption by far-right groups came to nothing.

The next steps for Momentum following the rally will be discussed at a meeting on Tuesday 13 September at 7pm at the Red Hall, 11 Grosvenor Rd, Broadstairs CT10 2BT.

Earlier this year shadow chancellor John McDonnell came to Ramsgate and challenged Thanet to come up with its own alternative economic plan. In this issue we begin the debate, exploring how new initiatives in health, homes, education and jobs could make another, better Thanet possible. ALSO: What’s the way forward for Jeremy Corbyn? The new Thanet Watch is available in independent newsagents and shops across the locality, price 80p. For full list see click on heading above.

This Friday Momentum Thanet is kicking off the local campaign to help re-elect Jeremy Corbyn leader of the Labour Party.
Come and along and find out how you can help.
7pm, Friday 29 July, at Broad St Hall, 3a Broad Street, Ramsgate CT11 8NQ
All welcome.

The man who UKIP paid to appeal to younger voters in Thanet, Aaron Knight, has been jailed for seven years for sex crimes on a seven year old boy. In  2014 he was interviewed by Thanet Watch’s Christine Tongue after breaking from UKIP. 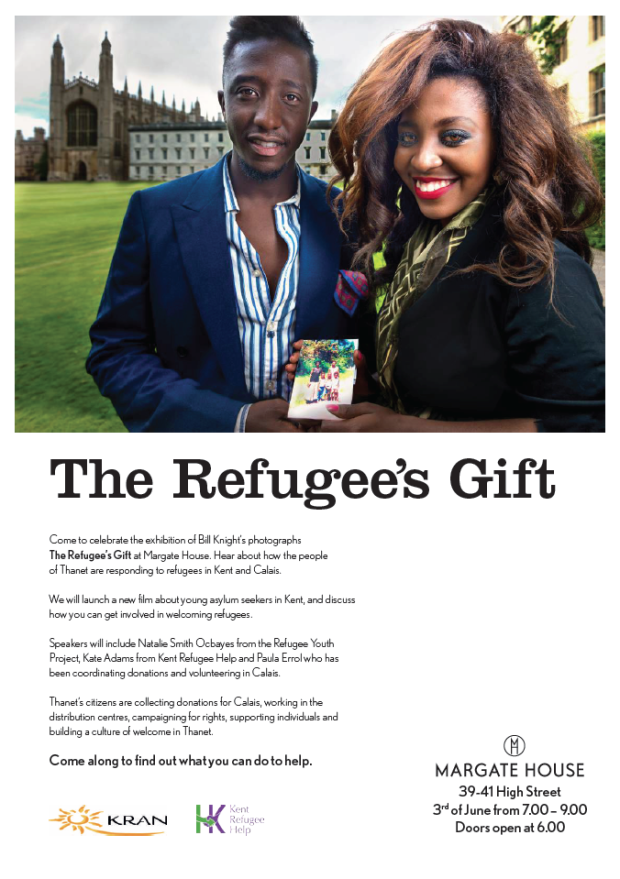 There will be a special event about refugees in Margate House, Friday 3 June, 7-9pm.

Visitors can also hear about how Thanet people are responding to refugees in Kent and Calais.

A new film will be launched about young asylum seekers in Kent and there will be a discussion about how people can get involved in welcoming refugees.

Thanet people are collecting donations for Calais, working in the distribution centres, campaigning for rights, supporting individuals and building a culture of welcome in Thanet. This is a chance to find out what more you can do!

Can Thanet become an “Isle of Sanctuary”?

Jacqueline Walker, National Vice Chair of Momentum and anti-racist
campaigner, has been suspended by the Labour Party
because of allegations of anti-semitism which she absolutely
denies. Here she speaks about what happened and what it means
for the Labour Party, free speech and political debate in Britain.

Jackie Walker is vice chair of South Thanet Labour Party and the national Momentum party, as well as organiser of Momentum Thanet.

She has been suspended from the Labour Party on the basis of posts on her Facebook page, published in February, in which she argued that the state of Israel cannot use the Holocaust to justify committing crimes against the people of Palestine.

Within those comments, which were a dialogue rather than a statement, she also compared the sufferings of African people  as a result of colonialism and slavery (called since the 1990s the “Black Holocaust”) with the holocaust perpetrated on Jewish people in WWII and claimed that Jewish people were among the chief financiers of the sugar and slave trade.

This information was collected by an outfit called the Israeli Advocacy Organisation and published by the pro-Israel Jewish Chronicle and passed onto the Labour Party.

Her comments have been taken out of context but even then can in absolutely no way be construed as anti-semitic.

Jackie is not facing legal action. There is nothing to stop any Labour Party member or group of members making any statement they like in support of her. There will be no legal repercussions for either Jackie or the members. Anyone who tries to restrain or muzzle support for Jackie is acting against her best interests.